Excerpts from a Natural History

Available from Titus Books and Amazon! 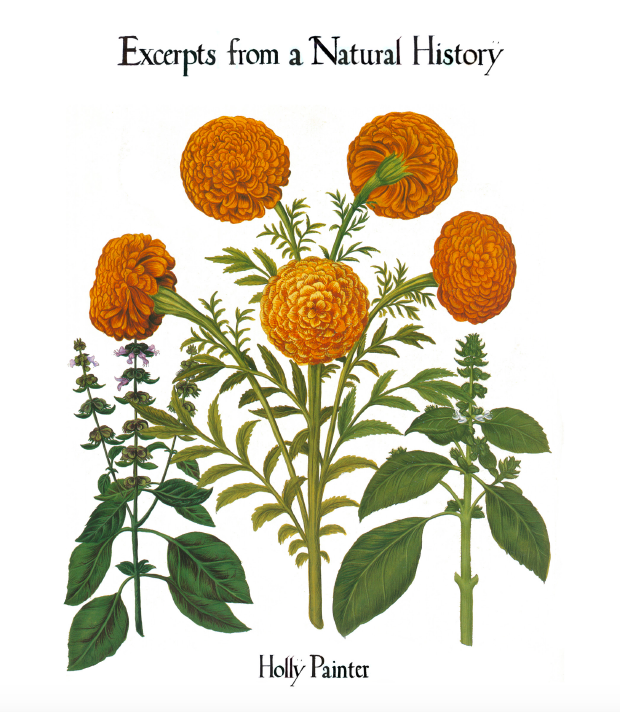 When the British natural philosophers of the 17th century founded modern natural history, they proposed finding a poet to compile a poetic account of everything that existed in nature, very broadly defined. Four hundred years later, the work is ongoing, made modern and rigorous with rules and style-guides, managers and research-poets.

This collection follows a year’s worth of submissions by one such researcher-poet, but the poems are only half the story. The rest lies in the revisions and comments—of both a professional and personal nature—between the poet and the editor back at corporate offices. As the relationship unravels, natural history becomes a tool of the heartbroken and obsessed.

Holly Painter is a trickster poet, you never know where she’s going next. Sometimes she wants to lick your ear. Over the page she might chew your leg off. — John Newton (Family Songbook, Lives of the Poets)

There are two writers of this book: a lyricist and a scientist. One might think they would be at odds with each other, because they are. Painter’s poems are punctuated by the commentary of a highly analytic logician. The unremitting voice of reason is given voice, like an alien attempting a study of human emotion in the margins. This book is actually two books. You should read it with you and yourself. — Paul Legault (Lunch Poems 2, Self Portrait in a Convex Mirror 2, The Emily Dickinson Reader, The Other Poems, and The Madeleine Poems)

“This book is a tonic for me as a reader and a boost in the blood for poetry. I adore it.” — Paula Green, NZ Poetry Shelf

“Painter has in this one collection told us varied, (at times scandalous), details may exist in margins, details about poets and their editors having far too much to do with each other. Also hinting that a poet’s place in the world could prove far broader than anyone may usually imagine.” — Raewyn Alexander, Rochford Street Review

“Holly Painter’s poetry turns to the power and sustenance of story, or to the heart-work that we find when reading about natural history and she relishes the sensual and psychological pleasures to be found there. This is a poet who holds the balance between irony and pathos on a knife’s edge.” — Patricia Prime, Takahē

“…there is a curious and quick brain at work here, and Painter is one to watch in the future.” — Sarah Jane Barnett, Landfall Review Online